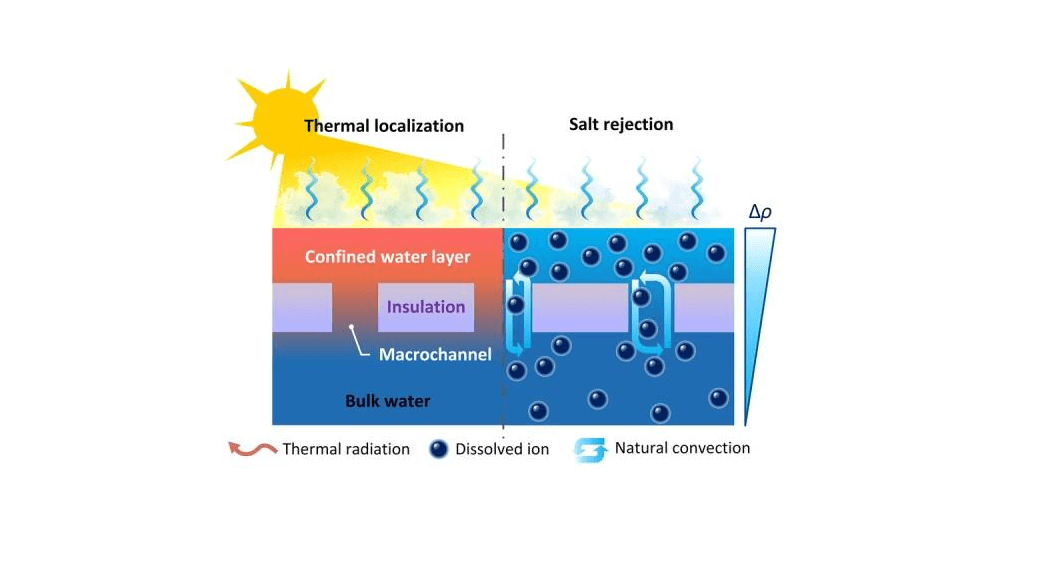 A team of researchers at the Massachusetts Institute of Technology (MIT) and Shanghai Jiao Tong University in China have come up with an inexpensive passive solar evaporation system that can be used to clean wastewater or desalinate saline water in order to provide potable water. Most modern attempts at solar desalination use some kind of wick to draw salty water through the device. But these wicks face the problem of salt accumulation, which causes the system’s efficiency to drop and requires regular and periodic maintenance, making it much more expensive and much less practical.

The new research findings have been published in a paper in the journal Nature Communications by MIT graduate student Lenan Zhang, postdoctoral associate Xiangyu Li, professor of mechanical engineering Evelyn Wang, and four others.

In order to avoid the problem of salt accumulation, the team created a wick-free system. Their system features a layered design with dark material at the top to absorb the sun’s heat, followed by a thin layer of water that sits above a perforated layer of material, which itself sits above a reservoir of salty or non-potable water like a tank or a pond.

“The recent development has been using wicking structures and novel materials to achieve high performance. But because of capture pressure, you restrict mass flow. Only the freshwater is evaporating. This leaves a lot of salt in this confined porous structure. This accumulates so much salt, that the system stops being efficient. This creates a reliability issue. We utilise natural convention to avoid using such materials,” Xiangyu Li told indianexpress.com.

After a lot of experimentation, the researchers determined the optimal size of the holes drilled through the perforated material (which was polyurethane during the experiments): 2.5 mm across. During the experiment, the holes were made using a high-pressure waterjet but Li doesn’t rule out the possibility of using other methods to create them.

According to Li, when you look at a road on a hot day, you see some wave-like things in the difference. This happens due to the fact that hot air near the surface is hotter, creating a convention flow causing the refraction with which you perceive those ‘waves’. Our device works on a similar premise, based on the different density of the water in the two layers.

“Unlike other designs with reliability issues, we use natural convention, relying on the geometry of the device. It was completely constructed from household materials we sourced through Amazon. By my estimates, it will cost about $4 for one square-meter device,” added Li.

Of course, this device only takes care of one part of the process: evaporation. In order to become a fully working system, it will also need a separate condenser. But Li reckons that a condenser device can be built to be equally as cost-effective as the evaporator.

With ideal conditions, a one square metre device like the one described Li should be able to yield about 6.5 litres of water.

The device isn’t without limitations though: the need for a reservoir like a tank or a pond means that it will be hard to deploy in areas that are truly arid. Instead, it is aimed at being a decentralised desalination and purification solution for families and communities who live in remote areas where geography and other factors make it difficult to access desalinated water from a centralised plant.

Also, the device is likely years away from a stage where it can be mass-produced or deployed as the researchers are still working on improving its operational efficiency and understanding what modifications need to be made based on various environmental and source factors like reservoir water quality, temperature etc.

Author water-digestPosted on February 15, 2022February 15, 2022
Neelanjan Banerjee will be taking over as the new Global Head of the Business Unit Lubricants Additives at LANXESS Corporation, USA effective July 1,...
Read More

Author water-digestPosted on November 4, 2022November 5, 2022
WD News: The 7th edition of India Water Week is focused on the theme – “Water Security for Sustainable Development with Equity”. The event...
Read More