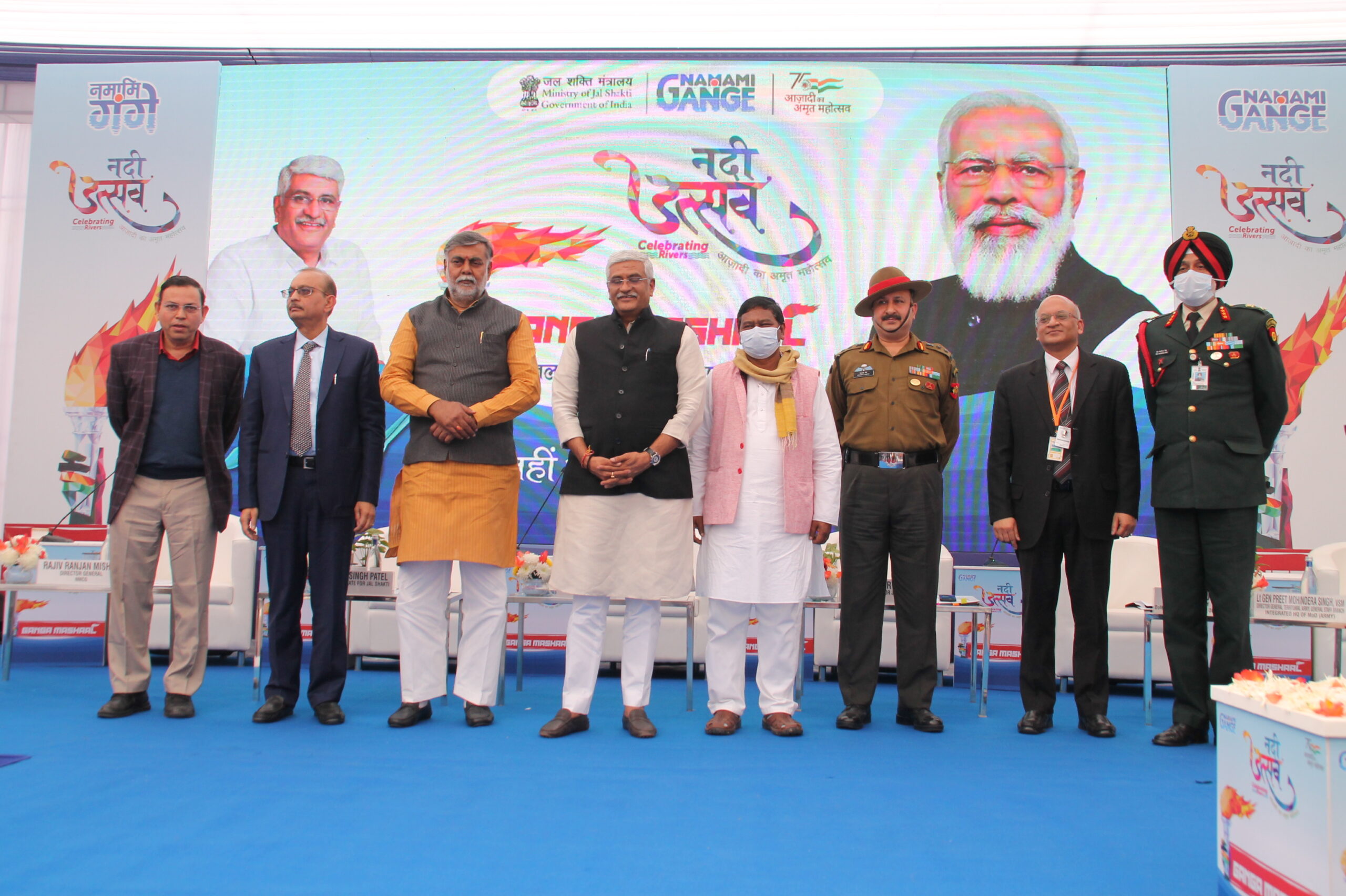 Addressing the program, Shri Gajendra Singh Shekhawa, Minister Jal Shakti said, “Today a Yatra ends here and the Nadi Utsav begins. According to the appeal made on the occasion of River Day, Hon’ble Prime Minister, Nadi Utsav is being organized near rivers in almost all the states”. He said, “India has a tradition of reverence and faith for rivers. Therefore, in the coming days, this festival will sow the seeds of reviving this tradition of respect for rivers in the common man and would encourage people to conserve our rivers”. The Minister said that after becoming the Prime Minister, Hon’ble Shri Narendra Modi ji had taken the initiative to ensure the Aviralta and Nirmalta of Maa Ganga, at a time when everyone had thought that it would be an impossible task, but due to his far-reaching vision, this challenging work is becoming possible. Talking about the Ganga Mashal Yatra, he said, “We have made Ganga conservation a mass movement through this Yatra. Emphasis has been laid on bringing about behavioral changes in the common man, so that Maa Ganga remains pure and flows uninterruptedly for the generations to come. Many sectors and institutions are involved in this program being run by the National Mission for Clean Ganga, which is making an important contribution in increasing its activities. This year we are celebrating Azadi Ka Amrit Mahotsav, so we are making a roadmap for the coming 25 years. How we want to see the country in these next 25 years depends on us. Today it is very important to deal with the challenges of water. Therefore, work has been done in this direction to connect the sentiments of the people with this campaign related to the resource of water. Since fire is considered sacred in our Puranas and considering the fire of this Mashaal as a witness, people are connected to this issue with a true heart”.

Director-General, National Mission for Clean Ganga, Rajiv Ranjan Mishra started his address by thanking everyone for making the Ganga Mashaal Yatra a successful one. He said, “According to the vision of Hon’ble Prime Minister Shri Narendra Modi, we have been successful in connecting people with the campaign of conservation and promotion of Ganga through the Namami Gange Mission. I am glad that today people are contributing in this direction by coming forward with full enthusiasm and spirit. As a result of this, today we have started getting a clear and uninterrupted glimpse of Mother Ganga”. Talking on public participation, he said, “We had started Mission Ganga -a rafting campaign in the year 2018 and then Ganga Amantaran Abhiyan to connect people across the country with the Namami Gange Mission and bring awareness among them, for which we got very positive results. Apart from this, we have also made youth and students a part of this campaign through initiatives such as the Ganga Quest Quiz. The Ganga Mashaal Yatra was also to connect people with this conservation initiative and make them aware, which has been very successful. The journey of the Ganga Mashaal from Uttarakhand to Bengal has received a lot of support”.

He went on to say, “Vijay Diwas today also marks the beginning of the Nadi Utsav which will be celebrated across the country from today till 23rd December 2021. States across the country are organising Nadi Utsavs to celebrate rivers throughout the country. The major rivers include- Ganga, Brahmaputra, Indus, Mahanadi, Cauvery, Ganga, Yamuna, Narmada, Godavari, Krishna, Kaveri, Mahanadi, Brahamaputtra, Sindhu, Sabarmati and Saryu. The celebrations are part of the ongoing campaign for Azaadi Ka Amrit Mahotsav, which commemorates the 75th year of India’s Independence.

During the event, a wonderfully inspirational video of Ganga Mashal Yatra was also released. In which the journey of making people aware from the beginning to the end of the Mashaal Yatra, connecting them to this mission and making them a part of the conservation and rejuvenation program of the Ganga river has been displayed.

The Mashaal was led by the Ganga Task Force, with the active support from NMCG, SPMGs, District Administrations, State and Central Departments and Agencies. Volunteering Groups such as NYKS, Ganga Praharis, National Cadet Corps, National Service Scheme, etc. as well as partner institutions such as Wildlife Institute of India, United Nations Environment Program etc all participated. At each location that the Mashaal reached, it was welcomed with great enthusiasm and participation from the local people. Various activities were organised at the local level such as cultural performances, nukkad natak, Ganga Aartis, afforestation, etc.

The National Mission for Clean Ganga had organized Ganga Utsav: A River Festival 2021 from 1st to 3rd December 2021 to celebrate not just Ganga River but all rivers across the country. It was conducted in a hybrid mode in New Delhi and in districts in the Ganga basin and beyond. The festivities had an overwhelmingly positive response, and people from across the country and outside joined us through our various social media handles. Over the course of one and a half month, over 150 districts of the country enthusiastically participated. Similar river festivals have been organized in various parts of the country from Bhagalpur (Bihar), Haridwar (Uttar Pradesh), Rewa (Madhya Pradesh) to the remotest areas of Leh and Kargil.

Author water-digestPosted on February 25, 2022February 25, 2022
The magnitude of rainfall received over the Western Ghats has increased between 1.5 to 2 times with each passing decade during the latter half...
Read More

Author water-digestPosted on October 19, 2021January 27, 2022
Odisha government has decided to float a fresh tender for the construction of an additional spillway to enhance the flood water discharge capacity of...
Read More