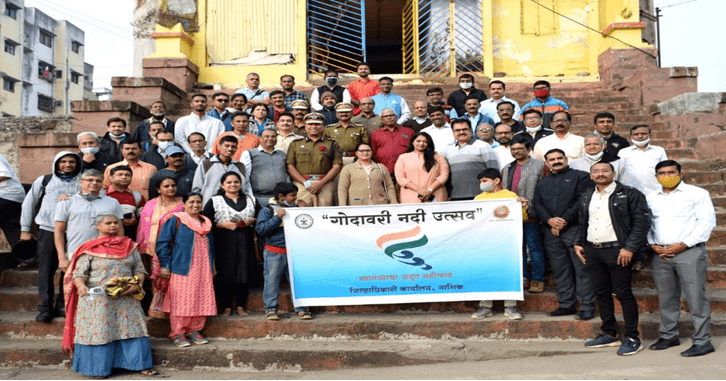 Nadi Utsav 2021 celebrated all over the Country Over 170 Districts in 22 States to participate
Nadi Utsavs around Brahmaputra, Indus, Narmada, Sabarmati, Mahanadi, Krishna, Godavari, Cauvery, Ganga, Yamuna, and many more rivers to be held

During his Mann Ki Baat on 26th August 2021, Hon’ble Prime Minister Shri Narendra Modi ji urged the nation to organize and celebrate river festivals at least once a year. Taking the cue from this clarion call, the National Mission for Clean Ganga organized Ganga Utsav- A River Festival 2021 to celebrate not just the Ganga River but all rivers in the country. From 1st to 3rd November 2021, the festival was organized in a hybrid mode in New Delhi as well as in the districts of the Ganga basin and beyond. The festivities received an overwhelmingly positive response, and people from across the country and outside joined us through our various social media handles.

An important activity which marked the third day of the Ganga Utsav was the flag-off ceremony for the Ganga Mashaal in the presence of Shri Gajendra Singh Shekhawat, Hon’ble Union Minister of Jal Shakti, Shri Kiren Rijiju, Hon’ble Union Minister of Law and Justice, Shri Pankaj Kumar, Secretary, Ministry of Jal Shakti, Shri Rajiv Ranjan Mishra, Director General, NMCG, and Shri Prasoon Joshi, Chairman, Central Board of Film Certification. The Ganga Mashaal is an iconic flame representing the collective sentiments and faith of the people of this country to rejuvenate Ganga river. It traversed a total distance of 2200 km in select 25 locations to raise awareness and encourage public participation in the process of river rejuvenation.

The date also marked the beginning of Nadi Utsav, which is a pan India celebration jointly organized by the National Mission for Clean Ganga, Ministry of Jal Shakti, Ministry of Culture, and Ministry of Tourism. The celebrations are under the Azaadi Ka Amrit Mahotsav campaign, which commemorates the 75th year of India’s independence. For Nadi Utsav 2021, action plans have been received from 22 states and over 170 districts to celebrate 10 rivers in the country.

Activities have already commenced and between 16th and 17th, December Nadi Utsavs have been organized in different parts of the country ranging from Leh, Uttarakhand, Maharashtra, Jharkhand, Odisha, etc. Celebrations around rivers are being held with great enthusiasm and participation of the local people under the four chosen themes of Cleanliness, Patriotism, Nature and Ecology, Devotion, and Spirituality.

Nadi Utsav 2021 festivities across the country on Day 3

Author water-digestPosted on October 20, 2021January 27, 2022
Grundfos recently launched its Distributed Pumping System in Thailand, which can reduce energy consumption for cooling large commercial buildings by up to 50%, drastically...
Read More

Author water-digestPosted on June 2, 2022June 2, 2022
The Tripura government has initiated a process to conduct a field study to operationalise a 54-km stretch on the Gomati river as part of...
Read More