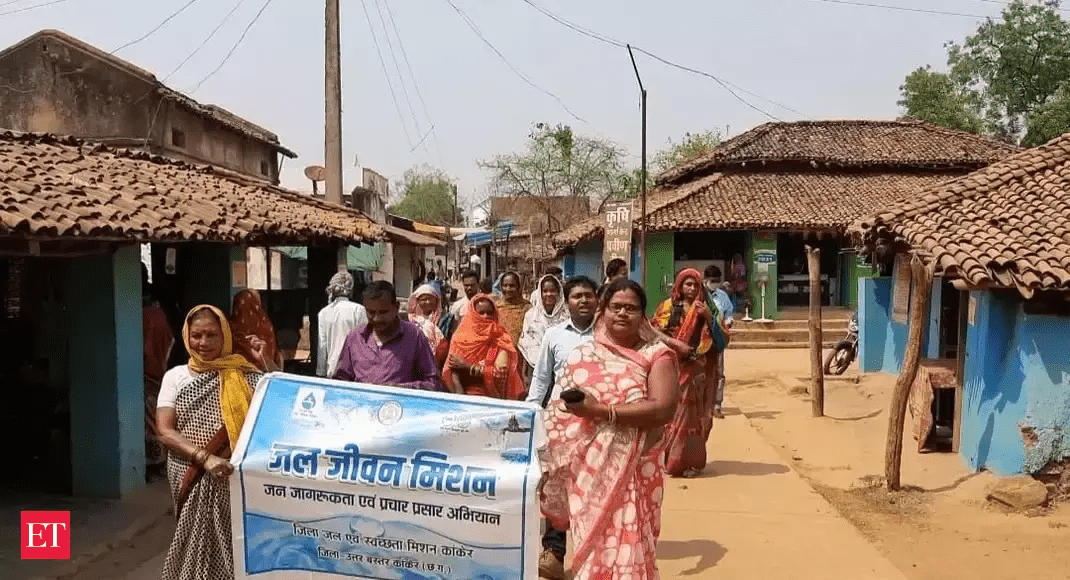 The Jal Shakti ministry has, in a bid to expedite the government’s ambitious effort to ensure access to clean, drinking water to every household through the Jal Jeevan Mission, has identified 13 focus states that are lagging in its implementation.

It has asked all states to send a firmed-up, state-wide coverage plan by the end of September.

“We are talking to the States regularly and particularly going into details in 13 states where 95% of the residual connections are located,” Vini Mahajan, secretary in the Jal Shakti ministry, told ET.

“There are many water-stressed areas. States have been asked to firm up what water sources have to be certified as sustainable for 30 years and give us a plan by September 30, get all tendering and awarding of works done by December 31. Then we have a year to accomplish the job,” Mahajan added.

Mahajan was formerly chief secretary of Punjab and was given charge of the flagship water supply project last year.

Presently, the programme covers 98.4 million households, or 51.47% of the total rural households.

The programme, announced by Prime Minister Narendra Modi on August 15, 2019, aims to provide clean tap water to every household in rural India by 2024.

The scheme has the potential to alter social hierarchies in rural areas, ridden by gender and caste complications. It is also seen as the most important project that the NDA government can showcase as it prepares for the 2024 Lok Sabha elections.

However, the Covid-19 spread and its resultant lockdowns slowed the pace of the programme, while the war Russia-Ukraine conflict and higher inflation in global commodity prices, particularly increased plastic and steel rates, has added to the deceleration.

“The rise in prices of steel and plastic worldwide affected the cost of pipes. Price of HDPE and PVC pipes – which were at 50% of the current costs – surged from late last year. Because of the price rise, the contracts awarded earlier became unviable for the concessionaires,” Mahajan said.

“Not all states provide modern advanced clauses to accommodate price variations, and many didn’t capture the kind of unexpected increase that happened. The contractors felt the awards that were signed earlier were not sustainable,” she added.

The project is now on track, with the Centre stepping in with import duty exemptions and inter-ministerial interventions.

“Recently, we held meetings with steel, Jal Shakti, States, implementing agencies on how to move the mission forward as the prices are cooling now. They are not back to the pre-increase times but there is some substantial reduction. We are also urging manufacturers to not pass on all the costs, in terms of inventory as they are getting scale now,” she said.

Mahajan said the Centre had specifically emphasised that the role of women be kept paramount in the mission as over 500,000 paani samitis (water committees) formed in 600,000 villages already have 50% women participation.

“We have looked at studies which indicate that there can be significant improvements in health and education outcomes of women once there is piped water supply in every household,” she said.

Acknowledging that the unequal distribution of water-fetching responsibilities not only has a financial toll on women, but also a physical one, Mahajan has also consulted with Professor Michael Kremer – who shared the 2019 Nobel Prize in economics with Abhijit Banerjee and Esther Duflo – on the social impact of the programme.

“The time saved in fetching water will result in labour, paid or unpaid. There is bound to be an increase in economic activity and education status as girls will be free from this burden. We expect health outcomes to improve as the occurrences of diarrhoea and water-borne diseases to come down,” Mahajan said.

According to Kramer’s own estimates, the infant mortality rate can go down by 25% due to just access to clean drinking water, as infants are most susceptible to infections and dysentery, she added.

Mahajan explained that when the mission was announced in 2019, there were only 3.43 crore connections, amounting to just 17 percent coverage at that time. Before 2018, getting clean drinking water closer to habitation was a priority, but even then women had to go out, and walk for long to fetch water. Guidelines for the Jal Jeevan Mission were released in September 2019.

“During the two years of Covid-19, States understood the programme and its needs, particularly in terms of building up the capacity. Public health engineering had not been used to doing this kind of work of this scale. You need tendering, quality checks of a very high scale now… The mission from the beginning has encouraged states to take help from district PMUs, third party agencies because they don’t have manpower of that scale. We have asked them to rope in engineering graduates and diploma holders. Involve more local people and get the work done. That is where the difference is happening,” she said.

Technical groups with experts were set up for the project and they have come up with recommendations to change the way contracts are awarded and address delays.

“For instance, the tendering was being done as per the schedule of rates that was not updated in the States for years. States have looked into SORs now, and at ways to improve contract management to get a better turnover of capital. We may buy the best pipes but if they are not laid properly, they will develop a leak the minute one vehicle goes on top of them. That will lead not just to water waste but spread of infections due to surface level contamination,” she said.

There is still an issue with getting clearances with railways lines, department of forests, GAIL pipelines among others which are being worked out, she said. “If these approvals are not followed up in time, they can delay processes.” In the last few months, the ministry has managed to obtain 12 clearances from Railways, one in Tamil Nadu, and four from NHAI and many from GAIL to speed up the coverage.

Many studies have pointed out that rural women in many States have to travel long distances, and use of unsafe drinking water results in the spread of water-borne diseases, a major cause of death in children under five.

“We have been very aggressive to ensure the role of women is the most important here. First of all, the water and sanitation committees have been asked to include at least 50 percent women, and States are adhering to that. The mission advises that the village committees manage the scheme, and we see the self-help groups are coming forward to handle the schemes, including effectively collecting the user charges. They are making savings that are going into the SHG kitty,” she said.

While there are 2,000 labs set up to ensure the quality of water — at least twice a year — field testing kits are being given out to states and five women in every village are being trained to use these kits to see if the water is clean. “We see that this move has empowered women to speak out,” she added.

According to Mahajan who has travelled to different states to review the pace of the mission, the programme has the potential to create tremendous impact on social structures. “What is limited in access is limited to the affluent. When you are covering something 100 percent, you are definitely empowering the disempowered. For long we have prioritised economic activity over clean, drinking water. That needs to change,” she added.

Author Water-DigestPosted on February 18, 2022February 18, 2022
The Uttar Pradesh government will restore and rejuvenate at least 50 small rivers in the state, leveraging support from MNREGA. Such rivers are lower order...
Read More

Author Water-DigestPosted on November 14, 2022November 15, 2022
WD News: The Pune Municipal Corporation (PMC) has launched action against residents using excess water. It has served notices to over 2,500 houses for...
Read More

Author Water-DigestPosted on July 25, 2022July 26, 2022
The next phase of the Delhi government’s groundwater recharge project is expected to take off soon with the revenue department wrapping up work to...
Read More

Author Water-DigestPosted on September 8, 2022September 8, 2022
The Union Jal Shakti Ministry has asked basin states of the Ganga River to strengthen the initiatives to promote natural farming along the river banks...
Read More