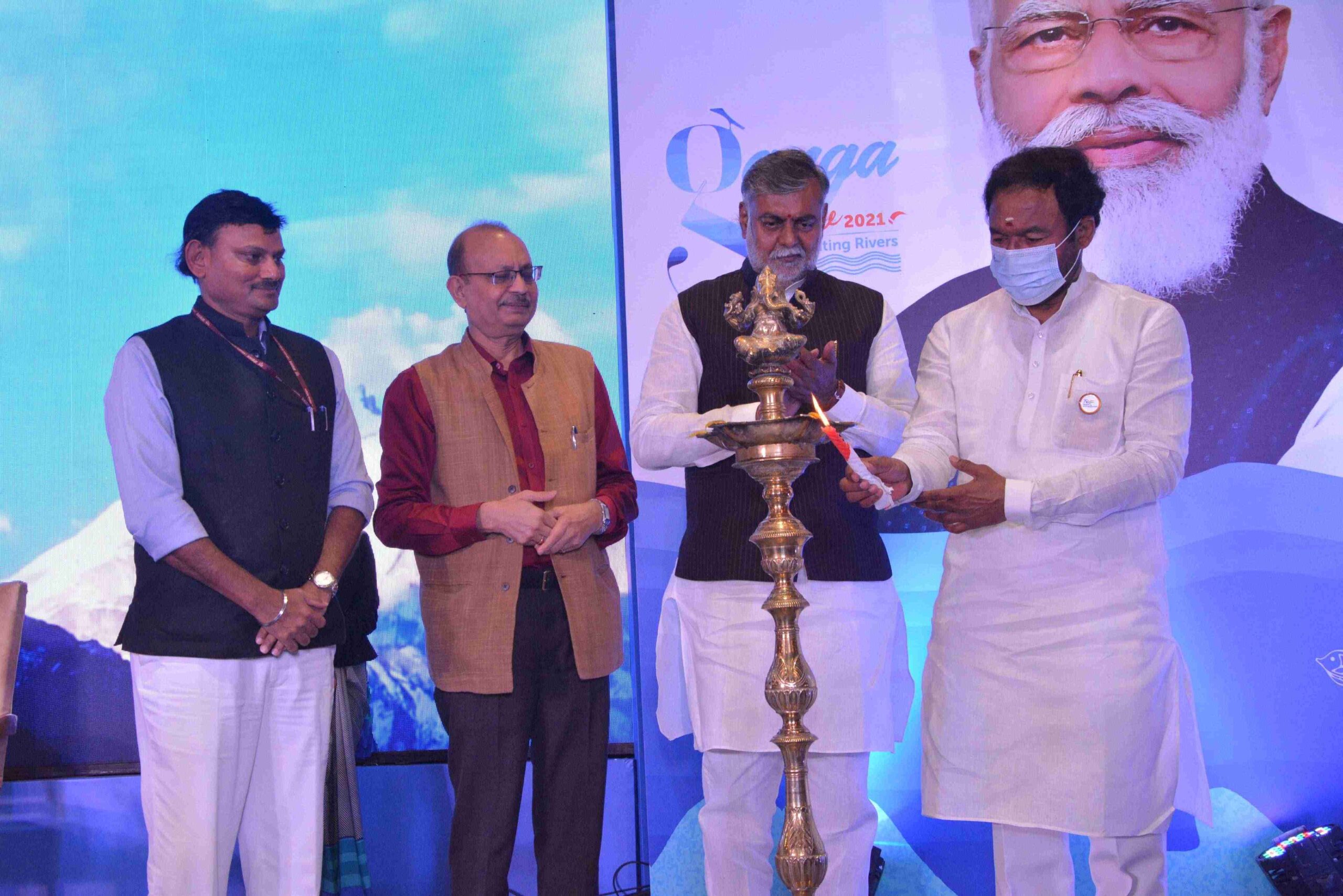 Celebrations and engaging conversations continued on the second day of Ganga Utsav 2021-The River Festival. This year’s festival is inspired by Prime Minister Narendra Modi’s call for celebrating Nadi Utsav to revive the ancient connect between people and rivers of the country.

The day began with Sarasvati Vandana in the mystical voice of Revati Sakalkar, who is well known as Kokila of Kashi. Officials of all partner organisations joined the audience to encourage the masses. Sharing glimpses of Day 1 of the festival, Rajiv Ranjan Mishra, Director General, NMCG thanked partner institutions including international ones like GIZ, NIUA etc.

He said, “NMCG is continuously engaging in public awareness and public participation activities to rejuvenate Ganga. This Utsav gives a big boost to all the ground volunteers like Ganga Doots, Ganga Praharis, NYKS and others to continue their work.”

Union Minister of Tourism, G. Krishna Reddy congratulated NMCG on the celebration of fifth edition of Ganga Utsav, saying, “Social, cultural and historical heritage of India is also reflected through this Utsav.” Emphasising the connection between river and people he said, “Rivers and Indian civilization are intertwined so much that every river is called as mother in India. Without rivers India civilization does not exist.” This is the reason why Ganga Utsav is also a representation of Azadi ka Amrit Mahotsav. He also shared about various initiatives like beautification of Ganga Ghats, Jalaj Safari etc taken by the Tourism Ministry in association with NMCG to promote tourism in Ganga basin. This will create employment opportunities for local communities and reduce their dependence on rivers.

Sharing his reverence for river Narmada Prahlad Singh Patel, MoS, Ministry of Jal Shakti said, “The existence of River is not from us but our existence is because of river. So, don’t treat your rivers as man-made canals.”  He added that instead of pointing fingers we should all focus on our (individual) contribution towards preserving our rivers. He said, “Nadi Mahotsav is not only a program but an occasion to remind ourselves that ‘Jal is Dhan’ (Water is priceless).  Today, on Dhanteras, let us pray to Goddess Lakshmi to bless us with Jal-Dhan (Water).”

A book ‘Celebrating the Spirit of Rivers’ put together by INTACH was launched by Union Minister of Tourism G. Krishna Reddy and MoS, Ministry of Jal Shakti, Prahlad Singh Patel. Manu Bhatnagar, Principal Director, INTACH was present on behalf of INTACH at the launch.

A music video, ‘Rivers of India’ celebrating all the rivers from Ganga to Godavari and Narmada to Cauvery was also launched by both the Ministers. The video is a creation of well-known Indian-American music composer Dr Kannikka Kannikeswaran in collaboration with The Center for Clean Water (ICCW), an initiative of IIT Madras. Leading Indian classical musicians, Jayashri and Kaushiki Chakraborty and their sons came together to make this breathtaking video along with contributions by several other musicians across the globe through virtual mode.

The curtain raiser of Ganga Knowledge Portal was launched to develop a robust knowledge management system for rivers. The first comic book, ‘Chacha Chaudhary and Ganga Utsav’ was released in the context of the already sanctioned initiative to connect children through the effective medium of comics.

The book of sponsored thesis, ‘Re-Imagining Urban Rivers’ was launched at Ganga Utsav 2021. This is developed out of another innovative attempt of Namami Gange mission to involve students developing holistic thinking for urban rivers through a thesis competition in partnership with National Institute of Urban Affairs.

In Ganga Dialogues, Ruchi Badola, scientist, WII shared how they have devised innovative ways of connecting river people. She also shared how they trained Ganga Prahris to protect the biodiversity of Ganga. In another session, famous poet and author Divya Prakash Dubey had a hearty conversation with actor Peeyush Mishra.

Folk singer Prahalad Singh Tipaniya left the audience spellbound. He brought alive sufi-saint Kabir to sensitise people about the importance of water. In the literary festival, well-known poets Aalok Shrivastav and Nilotpal Mrinal conveyed the message of river conservation through ghazals and Hindi poems. Day 2 of Ganga Utsav 2021 concluded with a Deepotsavam.

Rozy Aggrawal, ED (Finance), NMCG gave the vote of thanks on behalf of NMCG. He informed that more than 77 districts celebrated Ganga Utsav on Day 1 through various activities. This includes districts outside Ganga basin. He thanked the ministers, performers, audience and thousands of participants who joined the event virtually. The event will conclude on Thursday in the presence of Minister of Jal Shakti, Gajendra Singh Shekhawat.

Author water-digestPosted on October 25, 2021January 27, 2022
National Water Mission’s (NWM) campaign “Catch the Rain” with the tagline “Catch the rain, where it falls, when it falls” is meant to nudge the states and stake-holders...
Read More