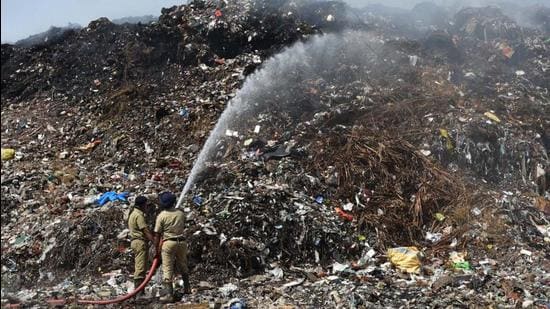 The cleaning of the Dadumajra dumping ground is not only costing the city more than Rs 33 crore, but in the last six years, approximately 40 lakh litres of water has been used to douse multiple fires at the site. As per a rough estimate, this quantity is enough to meet the daily water needs of approximately 16,000 persons.

With the number and extent of fire increasing over the past three years, particularly after 2019, the usage of water for fire control has also increased. In 2019, 1.25 lakh litres was consumed to douse the flames at the Dadumajra dump site, while it increased to 8 lakh litres in 2020 and went up to around 18.25 lakh litres till September 2021.

In 2019, the fire tenders made around 25 rounds to the Dadumajra dump site to douse fires. This increased to 90 rounds in 2020 and till September this year, 165 rounds have already been made. This March, a major fire broke out at the site that took around a week to be completely doused.

The figures on water consumption in dousing the flames at Dadumajra site were accessed and collated by Amit Sharma, a management consultant and resident of Sector 27, under the Right to Information Act. Sharma is also pursuing a case in the Punjab and Haryana High Court, seeking resolution of the dumping site problem.

The water used by the fire department is mainly from tubewells, which can otherwise be used for drinking purposes, said a municipal corporation (MC) official requesting anonymity.

“The dumping site is not only leaving a negative impact on the environment and people’s health, but is also leading to large quantities of precious drinking water being diverted towards firefighting operations at the site,” said Sharma.

More than two lakh metric tonne (MT) is fresh waste on the site, and five lakh MT is the legacy waste of more than 20 years (till 2005).

The daily generation of solid waste in the city is around 550-600 MT, but with less than 50 MT waste being processed every day at the Solid Waste Processing Plan, Sector 25, most of it is being dumped at the site unprocessed.

Notably, around five lakh MT of legacy waste was to be “bio-mined and processed through scientific procedures”, and the entire land of about 25 acres was to be reclaimed by May this year. The deadline has been extended to June 2023.

But of the total legacy waste of five lakh MT, only around two lakh MT (40%) has been removed as yet.

The Rs 33-crore legacy mining project was launched with much fanfare in December 2019 by the then UT administrator VP Singh Badnore in the presence of MP Kirron Kher.

For expediting the legacy mining work, MC commissioner Anindita Mitra, said, “We have increased the belt from 3 to 4 to speed up the progress. Now, daily progress 1,100 tonne per day.”

On stopping frequent fires at the dumping site, MC chief engineer NP Sharma, said, “The fires have taken place in the fresh waste dumping site. We are examining different permanent solutions to it, particularly, before the onset of summer.”

Author water-digestPosted on July 19, 2022July 19, 2022
The Haryana Water Resources Authority (HWRA) has revised the tariff for bulk water use of surface water in the state. The last revisions were...
Read More

Author water-digestPosted on April 1, 2022April 1, 2022
Single-use plastics contribute to over 50% of marine litter, as per the pan-India coastal monitoring and beach clean-up activities undertaken by the National Centre...
Read More