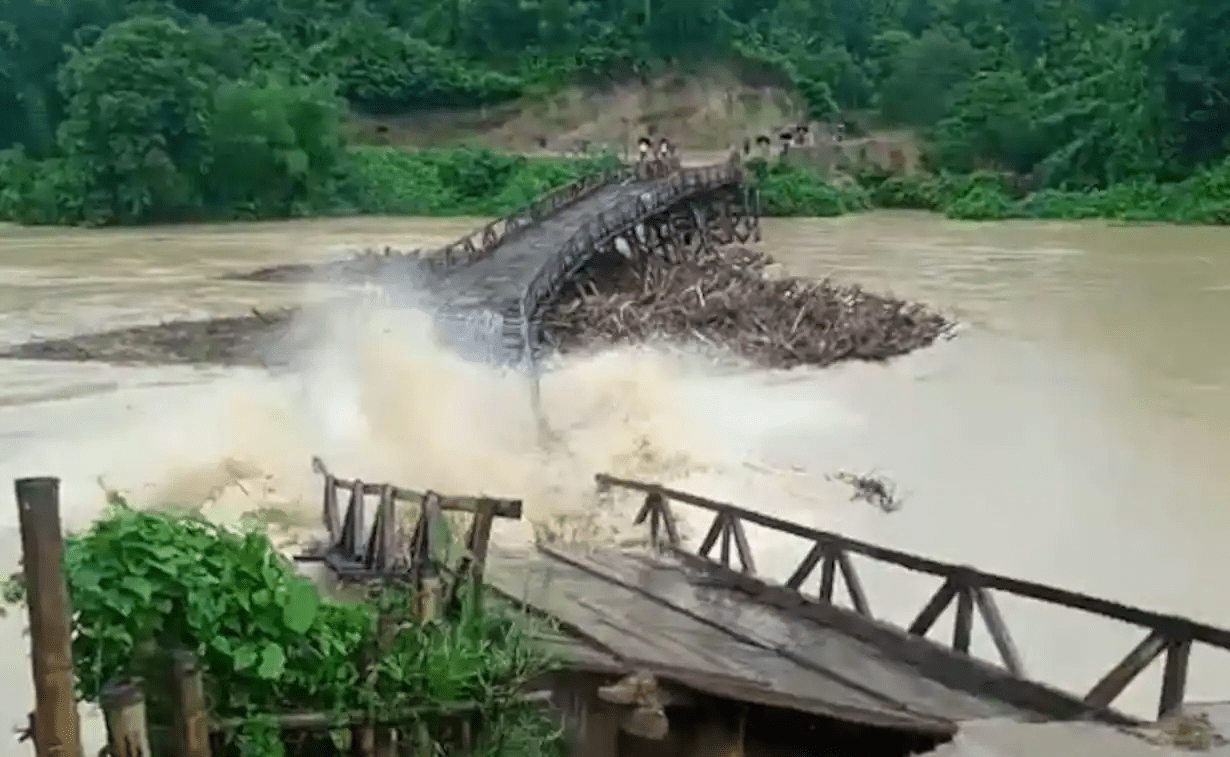 The India Meteorological Department (IMD) has issued a red alert for Arunachal Pradesh, Assam and Meghalaya for the next two days as extremely heavy rainfall has been predicted in these states since the monsoon has covered the entire northeastern region.

Rain-induced disasters have killed at least 43 people across three states — Arunachal Pradesh, Assam and Meghalaya — since May this year. Floods in Assam alone claimed the lives of 27 of them.

In Meghalaya, a video of a bridge being washed away in amid incessant rainfall that has led to flooding has gone viral on social media.

The bridge over the Bugi river connected Jijika to Megua in the South Garo Hills region. Bugi is said to be the third-biggest river in Garo Hills.

Meghalaya Chief Minister Conrad Sangma, who has deemed the situation as “serious”, will be visiting the flood affected areas of Garo hills.

Four people, including three minors, died in two different incidents of landslides in the Garo Hills region of Meghalaya.

The Assam State Disaster Management Authority (ASDMA) has also issued an alert in landslide and flood-prone areas after long hours of incessant rainfall across the state on Thursday, which affected surface communication temporarily.

In its special weather bulletin, the IMD stated that an east-west trough is running from southeast Uttar Pradesh to Manipur across Bihar, sub-Himalayan West Bengal and Assam and Meghalaya at 0.9 km above the mean sea level.

A red alert from the IMD is a warning for disaster management agencies to be prepared to take action to prevent possible eventualities due to excess rainfall.

Author water-digestPosted on June 29, 2022June 29, 2022
The Municipal Corporation of Delhi will rejuvenate 20 ponds across the city under the first phase of Amrit Sarovar Mission, according to an official...
Read More

Author water-digestPosted on June 18, 2022June 24, 2022
With less than 15 days to go for the deadline, only 10 states have formed the State Committee for Dam Safety (SCDS) while six...
Read More

Author water-digestPosted on November 24, 2021January 24, 2022
The Tamil Nadu government on Tuesday opened seven out of the 13 shutters of the Mullaperiyar dam due to rising water levels in the...
Read More