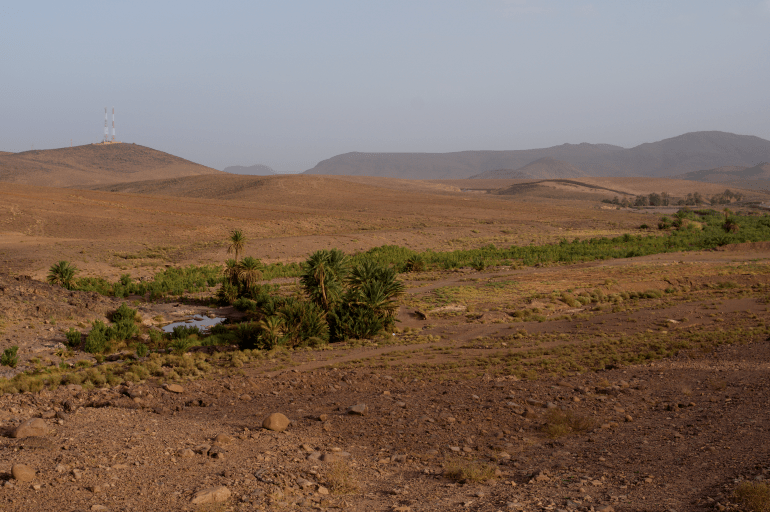 WD News: At the foot of the High Atlas mountain chain in southeastern Morocco, each village is named after the river that used to run through it. But today dry palm trees surround empty riverbeds and bridges now cross only stones left underneath.

The Ouarzazate semi-desert region is drying out. As in the rest of North Africa, global warming is already showing its effects and badly affecting agriculture. In the context of drought, Moroccan farmers point the finger at the mismanagement of remaining water resources, which have been diverted from their natural course to be set aside for expanding industries.

Three industries in Southeastern Morocco consume the most water: mining companies, agricultural monocultures, and the world’s largest solar power plant, Noor, generating thermal energy through an evaporation process. Water from the valleys around Ouarzazate is collected in the al-Mansour Eddahbi dam which is below 12 percent of its current capacity.

“Morocco is a leader in Africa when it comes to the fight against the climate crisis and environmental degradation,” the European Commission’s Executive Vice President for the European Green Deal Frans Timmermans said at the signing of the EU-Morocco Green Partnership a few weeks before the beginning of the COP27 climate summit in Egypt.

Local communities suffer from the effects of the climate crisis and do not even benefit from these large projects.

Along the roads through the desert, it is not uncommon to notice a white smoke cloud – a sign of mining activity. Excluding phosphates, about 40 percent of the mining licenses in Morocco are located in the Drâa-Tafilalet region.

According to a recent interview with the Minister of Energy Transition and Sustainable Development Leila Benali, companies in Morocco produce three million tonnes of minerals per year. Managem group, a Moroccan company operating in the extraction of precious metals and cobalt, owns the main sites in the region.

In operation since 2016, the Noor plant is the world’s largest thermodynamic solar complex. Locals say that water is being diverted for the wet cooling phase at the facility.

“Now all the water of our Dades river is directed to the dam, while we need it to penetrate our water table,” says Rochdi, a farmer from Kalaat MGouna. “The remaining water is pumped for intensive agriculture.”

According to authorities, the average rainfall this season was at its lowest level in more than 40 years.

“Morocco is among the world’s most water-stressed countries,” says a World Bank report. At 600 cubic metres (21,200 cubic feet) of water annually per capita per year, the country is already well below the water scarcity threshold of 1,700 cubic metres (60,000 cubic feet), according to the World Health Organization (WHO).

Instead of being equally redistributed among the population, 85 percent of national water consumption is swallowed by intensive agriculture, mostly for market produce such as watermelon and avocado, and arboriculture, including almonds and citrus fruit. These crops are water-intensive and mostly intended for export, at the expense of local subsistence farming.

The choices made by the kingdom in terms of the agricultural policy were set in stone in 2008 through the Green Morocco Plan, a 10-year strategy aimed at making the agricultural sector a priority for the country’s socioeconomic development. Modernisation, intensification, crop diversification, and land liberalisation were the keywords.

Nizar Baraka, Morocco’s minister of water and equipment, has called for reduced “water losses in the transport and distribution networks”, and “containing the demand for irrigation water”.

Baraka also promoted “investing in the modernisation of agriculture as an essential means to ensure and develop water and food security”.

In recent years, the region of Skoura, south Ouarzazate, which is already under stress from mining activities, has become a leading destination for large investments in watermelon production. Since 2008, the surface allocated to watermelon crops has multiplied 10-fold, jeopardising local water resources for small-scale farmers and villagers.

In Zagora, a small town of 30,000 inhabitants, water is distributed in dribs and drabs, a few hours a day.

KSB Reports Its Business Performance for Third Quarter of 2022

Author Water-DigestPosted on October 14, 2021January 27, 2022
While there are “Please do not spit paan here” boards everywhere on the railway stations across India, Indians are not shy of painting the...
Read More