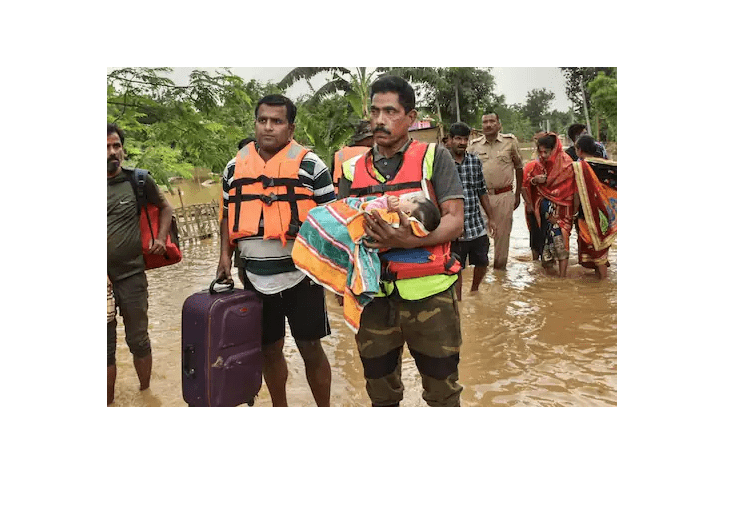 Extreme weather events, most of which were triggered by heavy rains, claimed as many as 230 lives across India during the pre-monsoon season, according to the seasonal analysis by India Meteorological Department (IMD).
Battered by torrential pre-monsoon rains and rising waters in one of the world’s largest rivers, Brahmaputra, north-eastern states bore the maximum brunt of the rough weather in the last three months.
The tumultuous pre-monsoon season spanning from March to May was also marked by a record-breaking heatwave that swept through as many as 17 states — serving as a grim reminder of India’s increased vulnerability to weather hazards that are expected to rise due to climate change.
According to the meteorological department’s analysis, 231 people died, 105 were injured, 11 were reported missing, and 1,234 livestock perished in extreme weather events across states. Heavy rains, floods, and landslides claimed as many as 81 lives and 1,151 livestock, most of which were reported from Assam and neighbouring north-eastern states. The deluge impacted millions of people, damaging infrastructure and standing crops spread across thousands of acres. The situation in the region remains grim, with another spell of heavy rains still underway.
Lightning proved to be a major killer, taking at least 76 lives across states, injuring 36 people, as well as killing 77 livestock. The maximum casualty was reported from Bihar, Uttar Pradesh, Karnataka, and Tamil Nadu. A previous estimate shows how there has been a 34% rise in lightning strikes over the country.
Thunderstorms, which commonly occur during the pre-monsoon season, also claimed 35 lives, at least 30 of which were reported from Assam alone. Meanwhile, 22 people were reported dead on May 23 due to dust storms in various parts of Uttar Pradesh. The casualty due to heatwave was put down to 15 in the official data, 13 of which were reported in Maharashtra.
It is significant to note that this data was part of the climate summary for the pre-monsoon season (March to April) released by the India Meteorological Department (IMD), and is collected by it from real-time media reports and other state government agencies.

Hottest Pre-Monsoon Season
According to the IMD, the average mean temperatures across India were above normal by a degree Celsius during the last three months. The seasonal average maximum, average minimum, and mean temperatures for the country as a whole during pre-monsoon were 34.49 ºC, 22.86 ºC, and 28.68 ºC respectively, against the normal of 33.45 ºC, 21.78 ºC, and 27.61 ºC based on the period 1981-2010.
The temperatures were record high for northwest India comprising Jammu and Kashmir, Punjab, Haryana, Delhi, Uttarakhand, Himachal Pradesh, Uttar Pradesh, and parts of Rajasthan, which was battered by the hottest pre-monsoon season in almost a century. The data shows that the average maximum temperatures of 34.55 degrees Celsius in the region from March to May were the highest in 122 years, breaking the previous record of 2010.
The blistering heatwave that started unusually early in the season disrupted almost every sector, impacted crop harvest, and led to grid overload in several states. Some meteorological stations, including Agra, Aligarh, Allahabad, Dehradun, Ambala, Karnal, Patiala, Shimla, Jammu, Srinagar, Lucknow, Dharamshala, Gwalior, and Solapur, broke their all-time records for the highest temperatures in the season. The mercury shot up to 46.6 degrees Celsius in Allahabad and Jhansi.

Rainfall over the country as a whole, meanwhile, was just one per cent below the long period average (LPA) of 131.7 mm. However, it was again northwest India that experienced a wide rainfall deficit of 63 per cent. The seasonal rainfall was in excess of 63 per cent for the south peninsula region, which saw several heavy rainfall events during the period.
Kochi saw record rainfall of 165.4 mm in 24 hours, breaking all its previous records. Gurugram too received record 24-hour rainfall of 73.4 mm on May 23, its highest so far.

China Finds Signs Of Water In Moon's 'Ocean Of Storms'

Majority of Bundelkhand Villages to Get Drinking Water by December 2022

Author Water-DigestPosted on November 17, 2022November 17, 2022
WD News: The Uttar Pradesh government has said that by 2024, seven districts of Bundelkhand would have clean drinking water at the doorstep. “This...
Read More

Author Water-DigestPosted on November 7, 2022November 7, 2022
WD News: As per a new report by Adroit Market Research, the water desalination market is expected to grow at a compound annual growth...
Read More

Author Water-DigestPosted on August 8, 2022August 8, 2022
Accumulation of a huge amount of silt in the Gori river over the years has made it change its course and flow threateningly towards...
Read More

Author Water-DigestPosted on December 6, 2022December 6, 2022
WD News: Talks are on between India and Nepal to remove debris from the banks of the Kali river on the Himalayan nation’s side...
Read More