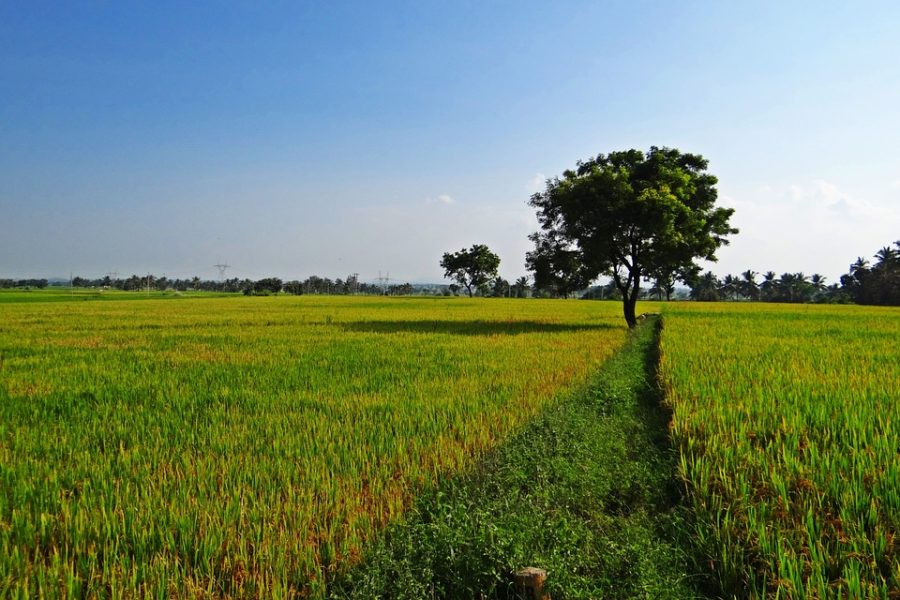 Parts of India, especially around the Gangetic plains, are facing acute shortage of rainfall. Paddy sowing has been sluggish over the past two months, even abandoned in some places, due to the monsoon deficit. In case rains play truant this month, farmers fear drought looming ahead.

“Paddy acreage remains a concern,” said Vijoo Krishnan, joint secretary of the All India Kisan Sabha, adding: “There are reports of around 27 lakh hectares less sowing of paddy this season.”

Rainfall distribution was uneven last month, with the Northwest, East, and the Northeast parts of the country recording deficit cumulative rainfall. Inadequate rainfall in Bihar, Jharkhand, Uttar Pradesh, and West Bengal – where many districts witnessed a drop in rainfall of up to 49 per cent – affected sowing.

According to the Indian Meteorological Department’s (IMD) Index for July, nearly 660 of 756 districts, about 85 per cent, were facing different degrees of aridity, and at least 196 districts are in the grip of severe dryness.

In May-end, the United Nations Convention to Combat Desertification (UNCCD) presented the ‘Drought in Numbers, 2022’, report. This highlighted India’s vulnerability to droughts.

The report analysed droughts and their impact on life and livelihood over 122 years covering 196 countries. It stated that over 1.4 billion people were affected by drought between 2000 and 2019. This makes drought a disaster affecting the second-highest number of people after flooding.

It was reported that India has featured in the assessment as one of the severely drought-impacted countries. Nearly two-thirds of the country suffered drought during 2020-22, whereas India’s GDP reduced by 2-5 per cent between 1998 and 2017 due to severe droughts in the country.

According to a study by the Indian Space Research Organisation (ISRO) on desertification in 2007, 69 per cent of land in India is arid. Large parts of such dry areas are in Rajasthan and the Rann of Kutch, while semi-arid regions of Punjab and Gujarat are in the rain shadow areas of western ghats.
The Centre insists that the Department of Agriculture and Farmers Welfare has taken steps to deal with the “extreme weather situation”. This includes issuing advisories to states through Crop Development Directorates in consultation with State Agricultural Universities and Krishi Vigyan Kendra (KVKs) for creating awareness campaigns and to implement contingency plans as per local need.
There are 731 KVKs in the country, which takes technology developed by the Indian Agricultural Research Institute to the fields for assessment under specific locations and various farming systems.
Stating this in the Rajya Sabha in a written statement on July 22, Union Agriculture Minister Narendra Singh Tomar said: “KVKs also conduct a large number of technology demonstrations at farmers’ fields for their adoption by the farmers.”
In another reply on the same day, Tomar said: “Besides, IMD…issues weather-based operational agro-meteorological advisories jointly with ICAR and SAUs under the Gramin Krishi Mausam Sewa (GKMS) Scheme.”
He added that Agromet advisories are communicated to farmers through mass media and a mobile app called ‘Meghdoot’ which has been launched by the Ministry of Earth Sciences to help farmers obtain weather information.
The Minister further informed the Rajya Sabha that a project is underway to develop and promote climate resilient crops and technologies “that help the districts and regions prone to extreme weather conditions like droughts, floods, frost, heat waves, etc., to cope with such extremes”.

The Agriculture Ministry is the nodal ministry for monitoring and managing drought conditions. Droughts are classified into meteorological droughts, hydrological droughts and agricultural droughts.
Meteorological drought is classified based on rainfall deficiency with respect to the long-term average – 25 per cent or less is normal, 26-50 per cent is moderate and more than 50 per cent is severe. And, per the Ministry of Jal Shakti, agricultural drought is identified by four consecutive weeks of meteorological drought.
Tomar said that around 68 per cent of the country is prone to drought in varying degrees. Of that, 35 per cent which receives rainfall between 750 mm and 1,125 mm is considered drought-prone while 33 per cent receiving less than 750 mm is chronically drought-prone.
The IMD is the designated agency for providing drought early warning and forecasting. The Agricultural Meteorology Division, Pune advises on the actual and expected weather and its likely impact on day-to-day farming operations.
For the country, the area-weighted rainfall having a normal of 88 cm, also called Indian Summer Monsoon Rainfall (ISMR), is considered.
When the rainfall deficiency exceeds 10 per cent and when the area under drought exceeds 20 per cent of the total area of the plains in the country (which is 32,87,782 sq km), such a situation is considered as drought, according to the IMD.

Farmers in several states are witnessing sluggish sowing due to the irregular south-westerly monsoon. Even in Maharashtra, where rainfall has been in excess, there are areas where sowing of kharif has taken a hit.
“Erratic monsoon has affected sowing in around 8.5 lakh hectare of land over 23 districts in Maharashtra,” claimed Raju Shetti, founder of the Swabhimani Shetkari Sanghatana. “Kharif crops like paddy, soybean and cotton sowing are already way behind schedule in these areas,” he said.
On the other hand, Telangana – which also is among top rice producers – is facing the threat of severe floods that may result in extensive crop damage.
Another major rice-producing state, Bihar, experienced a 36 per cent deficiency in rainfall in the past two months. “It’s a drought-like situation in all but one district,” claimed Krishnan.
Avinash, a 42-year-old educationist-turned-farmer, grows rice in about 7 acres of land at Orhanpur, about 10 km from the district headquarters of Nawada. This year, he is still waiting to start the sowing process due to the vagaries of nature.
“I and some others do not have borewells of our own. The owner of the one we share needs the water to keep his land flooded for sowing. We may get a chance later this month. Paddy needs standing water in the field for at least the first 15 days,” he explained.
He used to run schools in Delhi, but between demonetisation and the pandemic, he had to shut down and shift to his village in Nawada district.
“Rainfall in spurts does not help, even if it’s a strong shower lasting a couple of hours… The water is absorbed by the soil very fast. It needs at least two days of regular showers to let us sow paddy. And that has not happened this time,” he added.

A similar tale was shared by Sadhu Saran of Deoria district in Uttar Pradesh. He claimed acreage has been reduced by 50 per cent and has affected about 8 lakh hectares of land. He too is waiting for enough water for his crop.
According to IMD, the worst hit are districts like Kaushambi and Gonda, where rainfall recorded was negligible – deficient by well over 90 per cent.
Added to that are rumours about the police prohibiting use of groundwater. Some claim that it is a canard spread by owners of borewells, who hardly have water for their own field.

Like Bihar, its neighbour Jharkhand’s peasants prepare for sowing paddy around mid-June. The process of sowing goes on through the month of July. However, insufficient rainfall in June-July has been delaying their sowing till well into August.
Suphal Mahato of Maheshpur village in Ranchi district is devastated. “I don’t know what lies ahead,” he said.
In fact, this year, the state recorded the lowest rainfall in the first two months of the monsoon season compared to the past nine years. It recorded an overall deficiency of 49 per cent, which is the highest shortfall since 2014.
About 85 per cent of Jharkhand’s arable land meant for paddy cultivation is lying fallow, according to the sowing coverage report of the state agriculture department.
The state reportedly is working on drought relief plans. It includes an ex-gratia payment of Rs 60 per day to an adult and Rs 45 for a child.

IMD data for June-July 2022 shows that the southern part of West Bengal witnessed about 47 per cent rainfall deficit while it was down 24 per cent in the entire state.
The state tops in both area and production in the country. About 78 per cent of the total area under rice here is concentrated under high and medium productivity groups, which accounts for nearly 84 per cent of total production of rice in the state.
Rice is cultivated in about 18 districts of West Bengal. Out of these, four come under the high productivity group with produce of over 2,500 kg per hectare. Among the “rice-bowl” are Burdwan, Birbhum, Nadia and Hooghly districts. Another nine districts, producing 2,000-2,500 Kg per hectare, are under the medium group.
Farmers are waiting for August to deliver their manna from above after insufficient rains in the last two months.
However, except paddy, coverage of other kharif crops have been good in the country. The overall acreage of kharif was attributed to a substantial jump in the oilseed-sown area. Incidentally, the government has focused on oilseeds to reduce import bills.

Author Water-DigestPosted on January 16, 2023January 17, 2023
The Vanguard Series engines will offer the same horsepower and RPM figures, and be an option on 2” and 3” centrifugal dewatering pumps and...
Read More

Author Water-DigestPosted on February 4, 2022February 4, 2022
Two new Ramsar sites were announced, and a ‘National Wetland Decadal Change Atlas’ was released on the occasion of World Wetlands Day 2022 at...
Read More

Author Water-DigestPosted on December 23, 2022December 23, 2022
WD News: Tens of thousands of households could be left without water over the festive season due to burst pipes in some parts of...
Read More