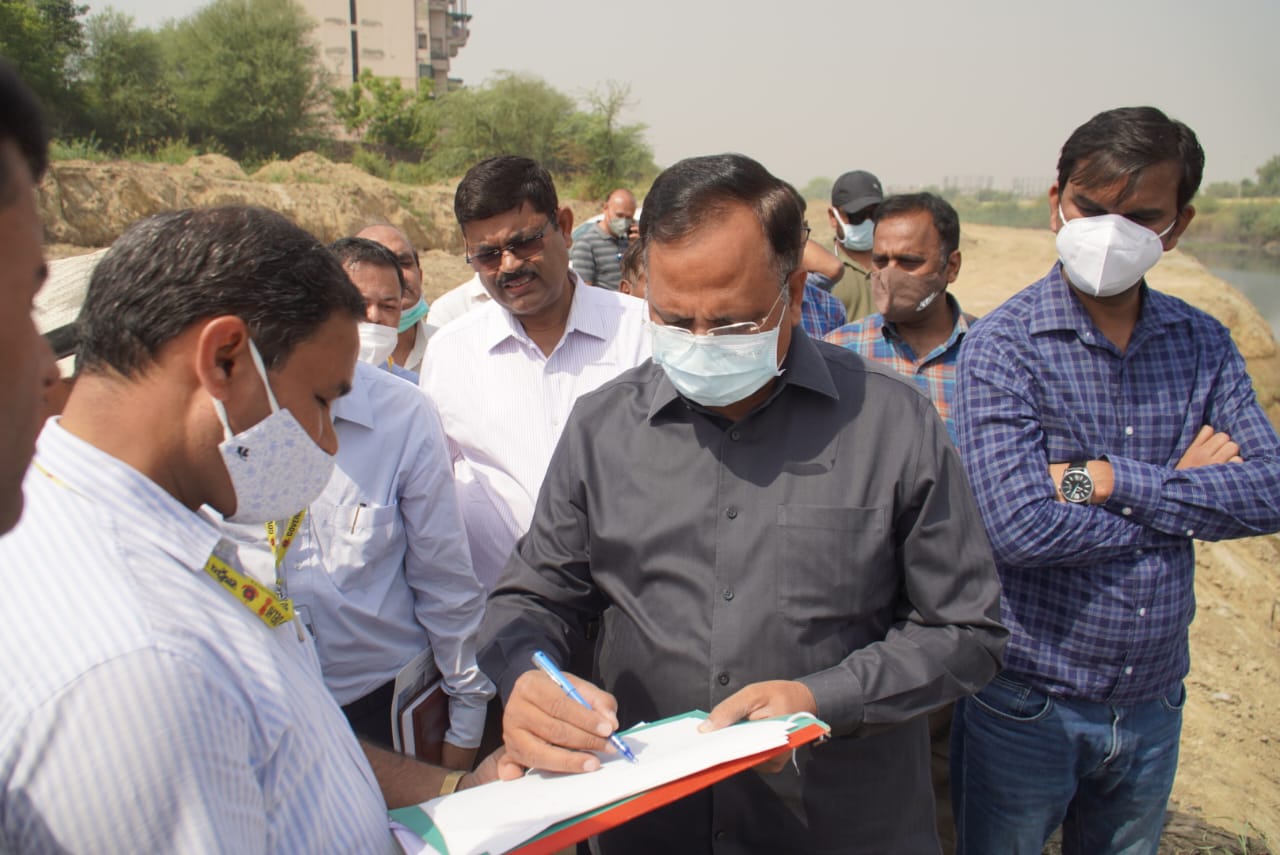 The Delhi Government is working expeditiously to realise its goal of cleaning the Yamuna by 2024, under which the work of cleaning the drains that flow into the river is being carried out. Water Minister and Chairman, Delhi Jal Board, Shri Satyendar Jain on Tuesday visited the supplementary drain site for inspection. During his inspection, he directed the officials of the Irrigation and Flood Control Department of Delhi Government to reinforce the strength of the temporary dams built on the supplementary drains and complete the work in time.

He also directed them to only use natural materials like bamboo and coir for floating wetlands. A floating wetland is a solid surface floating on water, on which water treatment is being done by planting certain vegetation. They will not drown in the rainy season and will keep the pollutants clean from the drain water in a natural way only if they are of optimum quality. 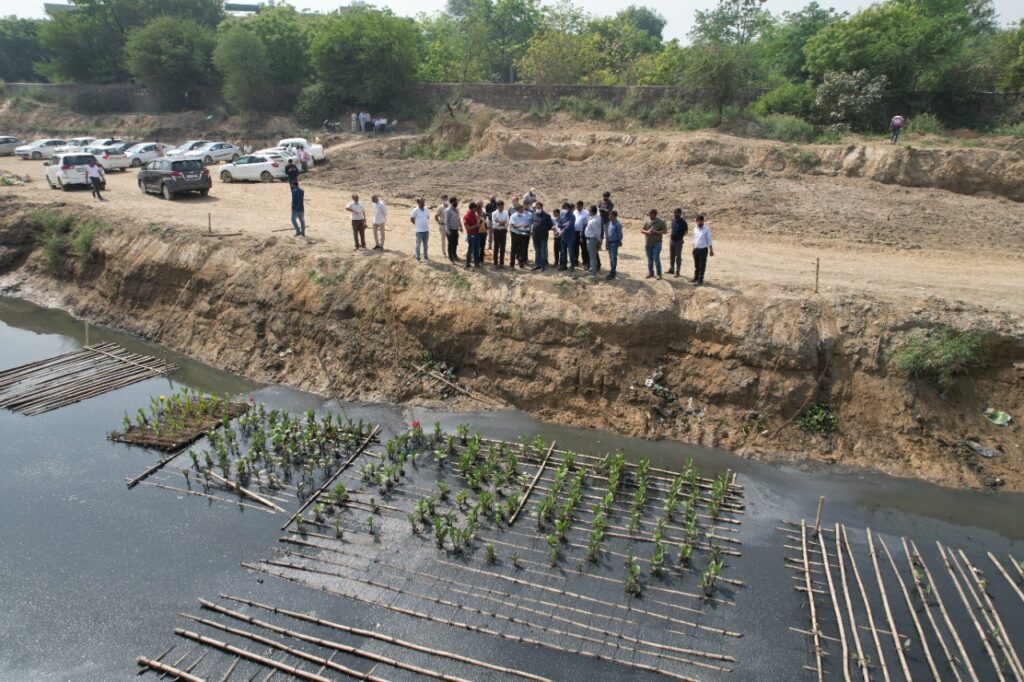 Delhi Government Water Minister Satyendar Jain said, “Delhi Government has taken up the task of cleaning the dirty drains falling into the Yamuna. Small temporary dams have been built on major drains that are under the ambit of the Government, due to which the BOD level of those drains has also improved. The work of constructing 11 small dams on Supplementary Drain and 13 Najafgarh Drain has been completed.

The construction of temporary dams on the drain is proving to be an effective method. The purpose of building the dam is that the fine particles present in the water settle on the surface of the ground and clean water overflows from the top of the dam and moves forward. Apart from this, the floating wetlands will absorb the dirt in the water. Aeration will also be done in the drains, which will allow the oxygen to dissolve in the water and will make the water cleaner. In this way, this water will reach the Yamuna, being cleaned in a natural way. At the same time, there will be an 80 percent reduction in the pollutants present in the water that flows from the supplementary drain into the Yamuna. This technique is also being used in the Najafgarh drain.

The work of improving the water quality in the supplementary drain is going on with full tilt for which floating rafters have been installed in the drain. These floating rafters are fitted with plants, which help to clean the pollutants from the water in a natural way.

Their roots act as filters. These plants not only have the ability to absorb pollution but also reduce water and air pollution. Like large plants, they absorb the pollutants dissolved in the air. Apart from this, good microbes from these floating wetlands also dissolve into the water. In this manner, the water will be treated before it even reaches Yamuna. The Delhi Government is treating the water in the supplementary drain in an in-situ manner. This in-situ technique treats the polluted water flowing through the Supplementary Drain inside the drain itself by means of filtering, saving the cost of building new STPs along with treating the sewage before it is flown into the Yamuna.

Currently, the Supplementary Drain is receiving a combination of wastewater and treated water from multiple sources. While DJB is working to tap and treat individual sources, the Irrigation and Flood Control Department is working to improve the cocktail of wastewater flowing in the drain by initiating treatment on as is where is basis. Major sources contributing flow to the Supplementary Drain are treated water from Rithala Phase – II STP with 40 MGD flow, 30 MGD untreated wastewater from Rithala Phase-1 as it is under rehabilitation, 7.5 MGD treated wastewater from Rohini STP at sector 25 and around 15 MGD from combined flow from multiple drains. Combined flow from these sources are treated through in situ treatment system. In future, flow from small drains will be diverted to STPs and treated water from the STPs will be diverted to lakes and forest thereby reducing net flow in the supplementary drain. In that situation treatment from in-situ treatment will further polish the water in the drain.

What exactly is the process involved in in-situ treatment?

There are four major drains that pollute the Yamuna. These are Najafgarh, Supplementary, Barapullah and the Shahdara drains. The Delhi Government is treating the sewage in an in-situ manner in all these drains. In this process, the Delhi government has added certain dimensions, one of which is the construction of small dams along the way of these drains. The second is the construction of natural floating rafters over the drains. Due to the construction of small dams, the toxic pollutants are trapped by hitting the wall of these small dams while light water flows over it. After this, the natural floating rafters help in increasing the amount of oxygen in the water so that the biological capacity of the water can be revived. This process has proved to be effective so much that 80% of the pollutants in the supplementary drain are being cleared during this process itself.

In the drains on which the dams have been built under the scheme of cleaning the Yamuna, samples were collected earlier from the dam near Rithala STP, the dam near Rohini Sector 11, Rohini Sector-16 and Rohini Sector-15. It was found there has been a significant reduction in suspended solid after the construction of the temporary dam. The total suspended solids level between Rithala to Rohini Sector 15 has come down from 166 mg/l to just 49 mg/l. These results also show a significant reduction in the amount of ammonia in the wastewater. The test showed that the ammonia level in Rithala was 26 mg per litre. There was a further reduction in Rohini Sector 15, as it was found to be only 18 mg per litre. The level of biochemical oxygen demand (BOD) in the polluted water gradually decreased after passing through each dam.

“Many more steps are being taken by the Irrigation and Flood Control Department which primarily include siltation of drains, installation of waste barriers, use of floating booms to remove floating solids, removal of solid waste and construction effluents from sewers, removal of garbage and other weeds, dumping in sewerage land. These also include repairs to boundary walls, construction of wire mesh over bridges, installation of warning boards and fencing of inlet lattice,” said Shri Satyendar Jain.

Source: Office of The Water Minister, Government of NCT Of Delhi

Author water-digestPosted on April 3, 2022April 3, 2022
The Supreme Court has asked the Union government to file details explaining the establishment and scope of authority of the National Dam Safety Authority...
Read More