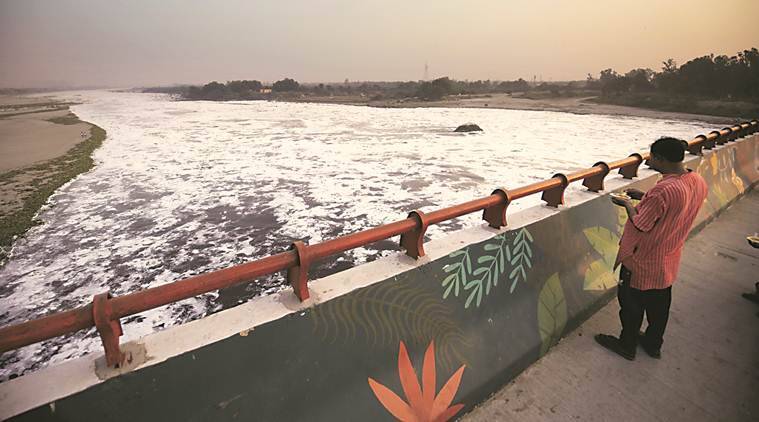 The Delhi government has taken a series of initiatives to clean Yamuna, its tributaries and the drains that flow into the river.

Temporary weirs built on major drains have substantially helped to clean the drains by improving their biochemical oxygen demand (BOD) level and decreasing the other pollutants as well.

The Irrigation & Flood Control Department of the Delhi Government is executing plans to treat the largest polluters of the Yamuna, i.e. Najafgarh Drain & Supplementary Drain on the river stretch. Focus is being laid on solving the problem of pollution from drains directly into the Yamuna.

A weir is a small barrier built across a stream or river that helps to raise the water level slightly on the upstream side. Weirs allow water to pool behind them while allowing water to flow steadily over top of the weir. Weirs are erected in the mid-flow of the drain to increase the retention of flowing water.  Currently, DJB treats the wastewater of the drains falling into both the Najafgarh as well as the Supplementary drain, only by trapping it through its Interceptor Sewer Project (ISP).

Apart from this, measures that are being carried out by the Irrigation and Flood Control department include, desilting of the drains, installation of trash barriers, floating boom to trap floating solid materials, removal of municipal solid waste (MSW) and construction and demolition (C&D) waste from the drains, removal of hyacinth, garbage, patera, and other weeds, Raising and repairing of boundary walls to prevent dumping in drain land, erection of wire mesh jalies at bridges, installation of warning boards and fixing of jalies at the mouth of inlets.

Subsequently, to boost this process administratively, the Yamuna Cleaning Cell (YCC) was constituted in November last year, under the direction of Chief Minister Shri Arvind Kejriwal, to ensure better coordination and an integrated approach to achieve the objective of Yamuna Cleaning. The cell is responsible for the execution of the Yamuna Cleaning Action Plan. The decision taken by the Cell is executed by the Members of the respective departments to ensure time-bound action.

Jordan is Running Out of Water

Author Water-DigestPosted on November 8, 2022November 11, 2022
WD News: Residents of Jordan, one of the driest countries in the world, have long been accustomed to a household water supply of only...
Read More

Author Water-DigestPosted on August 5, 2022August 5, 2022
As the flood water recedes after unprecedented rain in Assam, the fear of Japanese Encephalitis is looming large in the state. Usually when flood-affected...
Read More

Author Water-DigestPosted on November 23, 2022November 25, 2022
The Australia India Water Centre has brought together eight universities and one State Government Department from Australia and 16 IITs and key universities of...
Read More

Author Water-DigestPosted on June 29, 2022June 29, 2022
The Municipal Corporation of Delhi will rejuvenate 20 ponds across the city under the first phase of Amrit Sarovar Mission, according to an official...
Read More