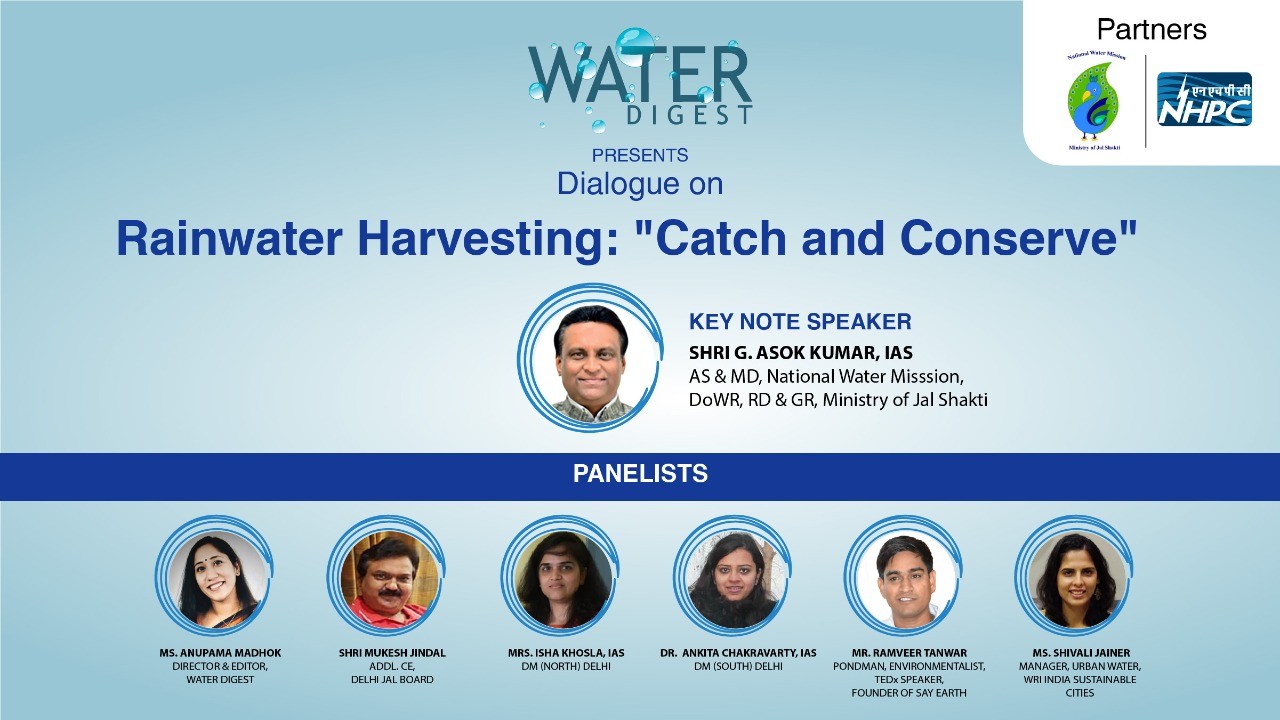 National Water Mission’s (NWM) campaign “Catch the Rain” with the tagline “Catch the rain, where it falls, when it falls” is meant to nudge the states and stake-holders to create appropriate Rain Water Harvesting Structures (RWHS) suitable to the climatic conditions.

Keeping this in mind and to deliberate on how to take the concept forward, Water Digest organised an online dialogue called the Water Digest Dialogue on “Rainwater Harvesting: Catch & Conserve” Delhi Chapter in partnership with National Water Mission and NHPC Limited. It concluded on October 22, 2021.

Water Digest invited notable speakers from the government, institutions & NGOs who helped augment the concept of rainwater harvesting by discussing technological advances, government initiatives, issues and challenges besides charting out measures to create awareness among people.

Ms. Anupama Madhok spoke about the initiatives taken by Water Digest to support the ongoing initiatives by the Government by organinsing a series of dialogues and training programmes in different parts of India.

Shri G. Asok Kumar shared the overall efforts made by the Government and by the National Water Mission. He also motivated all the panelists and participants to ideate more in this direction.

Mrs. Isha Khosla, IAS, DM (North) Delhi spoke about the method and technology being used to create awareness and regularly monitor the acceptance and implementation of rainwater harvesting in North Delhi.

Shri Ramveer Tanwar, Pondman, Environmentalist, TEDx speaker, founder of Say Earth shared the challenges that he faced in the initial stages and how he overcame them. He also shared about the work he has done in water conservation for Delhi.

Ms. Shivali Jainer, Manager, Urban Water, WRI India Sustainable Cities shared details about how she worked extensively with communities and general citizens in rainwater harvesting and also her experience and the hurdles they face while working at the community level.

Dr.  Ankita Chakravarty, IAS, DM, (South) Delhi spoke about the big change that can be noticed after effective usage of rainwater harvesting methods in Delhi.

The who’s who of Delhi Government and industry came together for this brainstorming session aimed at making the Rain Harvesting System in Delhi better and creating awareness of same among the people.

Considering the dearth in water resources due to climate change, rainwater harvesting is the need of the hour. Rainwater Harvesting systems have the potential to go a long way towards helping civic bodies and farmers in conserving water.

If rainwater is caught and harvested properly, it can certainly help in augmenting water resources.

Author water-digestPosted on March 3, 2022March 3, 2022
Sustained warming of the Indian Ocean will increase rainfall above the ocean, but weaken the Indian summer (southwest) monsoon over land, a study has...
Read More

Author water-digestPosted on November 30, 2021January 24, 2022
Chief Minister Bhupendra Patel has approved a proposal by the Surat Municipal Corporation (SMC) to set up a Special Purpose Vehicle (SPV) for the...
Read More

Author water-digestPosted on November 26, 2021January 24, 2022
The National Green Tribunal (NGT) has levied a penalty of Rs 28.20 crore on the Brihanmumbai Municipal Corporation (BMC) as environmental compensation for the...
Read More