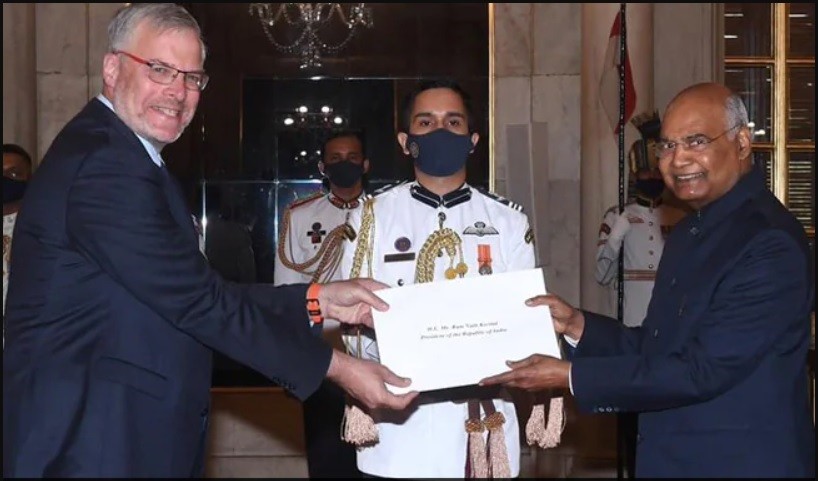 Israel’s new Ambassador to India, NaorGilon, presented at Rashtrapati Bhavan his Letters of Credence to the President of India, His Excellency Shri Ram Nath Kovind. On this occasion, H.E. Ambassador NaorGilon said, “I am honoured and privileged to be given this opportunity of taking forward the growing strategic partnership between Israel and India. Our friendship is based on our shared values as prominent ancient civilizations in the past and leading democracies in the present.”

He further added, “Next year in January, we will mark 30 years of Diplomatic Relations between our countries. I am sure that our close existing cooperation in different fields will only continue to grow and flourish in the coming years. I look forward to working closely with the people and the Government of India.”

Ambassador Gilon was born in Israel in 1964. He graduated from TeI Aviv University with a BA in Political Science. In addition, he holds an MA in International Relations from Corvinus University of Budapest. He rose through the ranks of Israel’s diplomatic corps and for over thirty years has played a key role in representing the State of Israel.

Between 2005 and 2009, Ambassador Gilon was Head of the Bureau for International Affairs at the Center for Policy Research. In 2009, he was appointed as Chief of Staff to the Minister of Foreign Affairs. Later he served as Deputy Director-General responsible for Europe, the EU, and NATO (2009- 2011).

Ambassador Gilon is married with four children and four grandchildren.