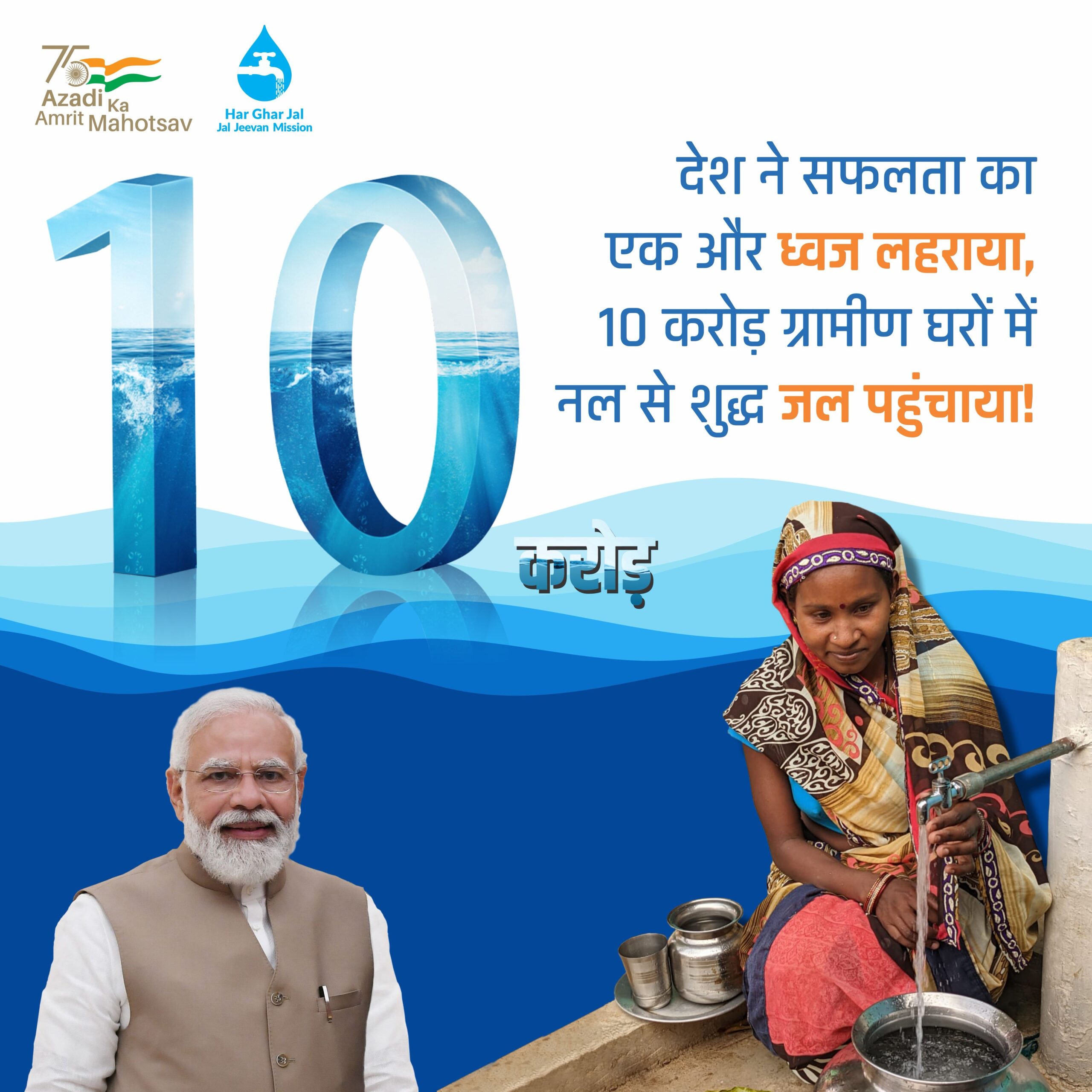 As the country celebrates Azadi ka Amrit Mahotsav, to mark 75 years of India’s Independence, Jal Jeevan Mission (JJM) achieves a new milestone by providing 10 crore rural households with safe and clean drinking water through taps. On 15th August 2019, when the Prime Minister Shri Narendra Modi launched Jal Jeevan Mission, from the ramparts of the Red Fort, only 3.23 crore (16.90%) of the households in villages had access to piped water connection. The country achieved the landmark of 10 Crore Functional Household Tap Connection on 19th August 2022.

As of date, 3 States (Goa, Telangana and Haryana) and 3 UTs (Puducherry, D&D and D&NH and A&N Islands), have reported 100% coverage. Punjab at 99.93%, followed by Gujarat at 97.03%, Bihar at 95.51% and Himachal Pradesh at 94.88% are also poised to achieve saturation shortly. On 17th August, 2022 Goa and Dadra & Nagar Haveli and Daman & Diu (D&NH and D&D) became the first ‘Har Ghar Jal’ certified State and UT in the country respectively, where people in all villages confirmed availability of adequate, safe and regular supply of water for all households in their villages, through Gram Sabhas.

The objective of the Mission is to provide every rural household with drinking water in an adequate quantity of prescribed quality on a regular and long-term basis. Despite various disruptions and challenges like the CoVID-19 pandemic, States/UTs are working relentlessly to overcome the challenges like harsh weather conditions, remoteness, tough terrains, hills, forests, etc. to ensure tap water in every rural home. On many occasions the pipes and other equipment are transported on helicopters, boats, camels, elephants and horses.

The relentless efforts of the Union and State governments have also resulted in ensuring provision of tap water supply in 8.67 lakh (84.35%) schools and 8.96 lakh (80.34%) anganwadi centres in the country. In the 117 aspirational districts of our country, at the time of launch of the Mission, only 24.32 lakh (7.57%) households had access to tap water which has now increased to 1.54 crore (48.00%). Three Aspirational districts from Telangana (Komaram Bheem Asifabad, Jayashankar Bhupalpalli and Bhadrabri Kothagudem) and 1 district each in Punjab (Moga), Haryana (Mewat) and Himachal Pradesh (Chamba) have reported 100% tap water coverage.

In order to achieve long term sustainability of the schemes, community participation has from the very beginning been at the heart of planning, implementation, operations and maintenance of Rural Piped Water Supply schemes. A total of 5.08 lakh Village Water & Sanitation Committees (VWSC)/ Pani Samitis have been constituted in the country. Also, 4.78 lakh VAPs have been prepared which detail out the plans for drinking water source augmentation, greywater treatment and its reuse, and regular operation and maintenance of in-village water supply systems.

Water Quality under this mission is a very important aspect. A total of 2,070 water testing laboratories have been developed, strengthened and empaneled in the country during the Mission period. As of date, more than 64 lakh water quality tests have been conducted in 4.51 lakh villages through water testing laboratories. Water quality testing labs of States/UTs are now open for the public for testing water samples at nominal rates.  Till now, 10.8 lakh rural women have also been trained to use Field Testing Kits (FTKs). Over, 58 lakh water quality tests have been conducted by trained women in 1.7 lakh villages using FTKs.

Author water-digestPosted on June 29, 2022June 29, 2022
The Municipal Corporation of Delhi will rejuvenate 20 ponds across the city under the first phase of Amrit Sarovar Mission, according to an official...
Read More

Author water-digestPosted on June 15, 2022June 15, 2022
The State of Israel and Government of Haryana signed a joint declaration in the field of integrated water resources management and capacity building on...
Read More