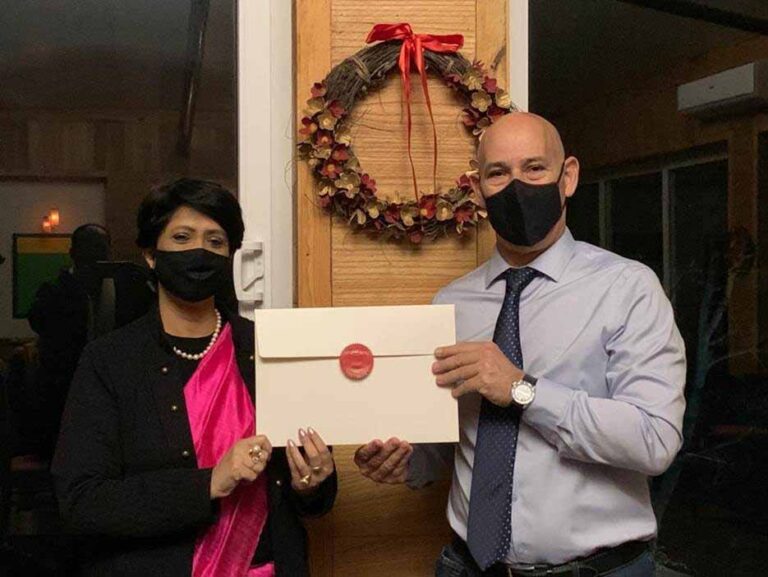 New Delhi, 8th January 2021: Aiming to augment its presence and collaborations with North-East India, the embassy of Israel in India appointed Mrs. Joyshree Das Verma, Honorary Consul, to be stationed in Assam with jurisdiction over the states of Assam, Arunachal Pradesh, Nagaland, Manipur, Mizoram, Meghalaya, Tripura and Sikkim.

The Indian Israeli Ambassador, H.E. Dr. Ron Malka preconized the appointment by quoting, “The relations between our two countries are growing and expanding rapidly. We are now going to take it forward and increase our presence in North-East India. I am proud to present the credentials of Israeli honorary consul to Mrs. Joyshree Das Vermas, who will work with us to further strengthen our growing partnership in this region.”

On the other hand, the appointee, Mrs. Joyshree Das Verma went to say, “I am immensely honoured and humbled to represent Israel as Honorary Consul for the North-Eastern states. This all-encompassing role excites me greatly as there are vast possibilities & opportunities to leverage Israel’s technology and expertise in various areas. I am pledged to work in the best interests of Assam and all the North Eastern States.”

The Israeli embassy plans to recognize all probable areas of cooperation in the North-East and deploy expertise and advanced technologies to facilitate development for people residing in the region.

Dr. Ron Malka’s visit to Assam, Meghalaya and Tripura in November 2020 was dedicated to official meetings with Chief Ministers. The meetings were intended to discuss at length the virtues of collaboration on a varied range of prospects including agriculture, water management, tourism, horticulture, fisheries and diary. Another important milestone was achieved during his visit, as he laid the foundation bricks to a Center of Excellence (CoE) for Vegetables in Khetri, Assam.

The first Indo-Israeli Centre of Excellence witnessed it’s dawn in 2018, in the state of Mizoram. Within a short span, the centre has evolved into a powerful, sustainable platform for addressing challenges with the help of applicable research and introduction of relevant, innovative Israeli agro-technologies that best suit the needs of farmers.

Author water-digestPosted on February 15, 2022February 15, 2022
Neelanjan Banerjee will be taking over as the new Global Head of the Business Unit Lubricants Additives at LANXESS Corporation, USA effective July 1,...
Read More

Author water-digestPosted on January 20, 2022January 24, 2022
Believes Desalination and Recycle & Reuse to be the key growth vectors to ensure Water Security with an estimated market potential of over $40...
Read More