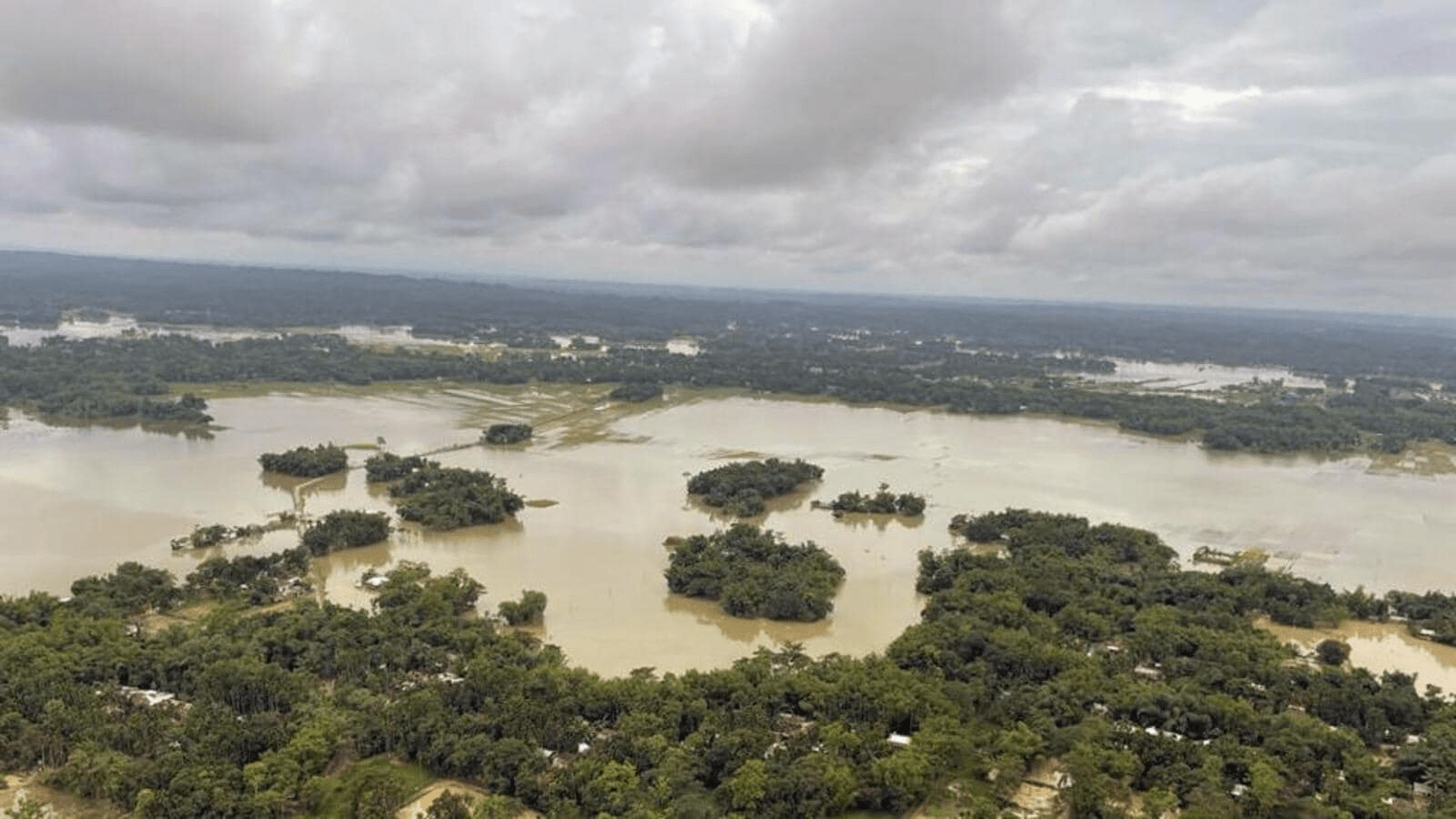 The flood situation in Assam and Meghalaya continued to remain alarming due to ongoing extremely heavy rainfall in the northeastern states. However, India Meteorological Department (IMD)’s study highlighted that monsoon rainfall over northeastern states has been on a decreasing trend in the past three decades, pointing at changing weather patterns due to climate change.

At least 121 people have died in rain-related incidents since April 1 in Assam with over 2.5 million people still reeling under the deluge, according to a report by Assam State Disaster Management Authority (ASDMA). In neighbouring Meghalaya, several parts of the state were cut off last week when incessant rains caused landslides, mudslides and flooding.

Nearly every year these parts of the northeast suffer deluge during monsoon months. However, IMD’s analysis of ‘rainfall variability and changes over different states’ for the period between 1989 and 2018 for Assam suggests that monthly rainfall for all monsoon months between June and September is recording a decreasing trend. This pattern indicates that localised and episodic extreme rainfall events are increasing over these regions which trigger disasters, but monsoon patterns as such have undergone a significant change in recent decades.

“Due to heavy rainfall in the eastern Himalayan and other watersheds of the north-eastern parts of India, Assam has extensive river systems consisting of the Brahmaputra, Barak, Burhidihing, Danshiri, Subansiri, Kopili, Dihang and others. All these rivers in Assam are vulnerable to floods, mainly because they receive heavy rainfall within a short time in the state and its neighbourhood where water runs very fast into Assam, which has mostly low elevation,” states IMD’s analysis, also available on IMD Pune’s website.

These rivers are in their early stage of maturity and are very active agents of erosion. “The river water collects a tremendous amount of silt and other debris from the hilly terrains and raises the level of the riverbeds,” said IMD Pune in its rainfall variability analysis.

“During the past 15 to 20 years, there has been a very clear and significant decreasing trend in rainfall over northeast India. This is a shift in weather patterns that we are seeing,” Pulak Guhathakurta, head of the climate division in IMD Pune told Hindustan Times.

“Monsoonal weather systems have reduced leading to reduced overall rainfall. Depressions used to form during monsoon months that would bring continuous downpour to this region or usually a trough would form in Bihar and move towards northeast India. We are not seeing these formations anymore. But there is massive rainfall during a short period of time like we saw in Meghalaya and Assam in the last two weeks. These short duration heavy rainfall events are expected due to climate change.”

“Northeast India used to receive large amounts or rain and comparatively it still does because the normal here is very high but we are seeing that the quantum of rainfall is increasing along the west coast now. This is apparent in the new maps for normal rainfall issued in May,” Guhathakurta told Hindustan Times.

“The Intergovernmental Panel on Climate Change has also said the quantum of rainfall may not increase but extremes will.”

A similar pattern is seen in Meghalaya and Arunachal Pradesh as well. Meghalaya — which has a hilly terrain with elevations varying from 150 metres to 1,965 metres above mean sea level with Khasi hills in central part, Jaintia hills in the east and Garo hills in the west and some plain area of low elevation — is also seeing a reduction in seasonal and annual rainfall, according to the IMD analysis.

All districts of Arunachal Pradesh have hills of peak height more than 2,500 m. There is a wide variation in the topography of land with elevation from 150 m to 7,090 m above mean sea level which also often leads to very heavy rainfall over the region. But all months along with seasonal and annual rainfall are recording a decreasing trend in rainfall, IMD said.

Kerala, another state extremely vulnerable to floods and monsoon disasters, is also seeing a decreasing trend in rainfall during the main monsoon months of June and July, the IMD analysis highlights.

According to Roxy Mathew Koll, climate scientist at Indian Institute of Tropical Meteorology, Pune, “Monsoon has huge regional and temporal variability across the country, which often gets masked if we consider the ‘All India rainfall’ as a representative index. Floods can happen in one part of the country, while dry or drought conditions occur elsewhere. These events may spread out through the season also, such that a region gets floods and long dry periods in the same season.”

“Hence, a ‘normal monsoon’ based on national and seasonal average does not help agriculture or water security for a region.”

The regional and temporal variability is observed because the monsoon flows through Arabian Sea, Indian subcontinent and Bay of Bengal. There are other climatic drivers as well that affect the monsoon such as El Niños and La Niñas in the Pacific and conditions in the Indian Ocean.

“Changing temperature and moisture distributions due to global warming can also affect the monsoon flow. A consistent change that we have seen in monsoon is a slight weakening of monsoon winds towards inland India,” said Koll. “At the same time, there are huge fluctuations, whereby occasionally there is a surge or moist winds releasing a lot of water onto the land. This change in monsoon circulation has resulted in a reduction in the total amount of rainfall over central and north India and parts of Western Ghats including Kerala.”

Many of these regions face extreme rains during short periods, leading to floods, the climate scientist said.

“Our research links these monsoonal changes to rapid warming in the Indian Ocean, particularly the Arabian Sea region.”

Urbanisation and land use changes also impact the way rain and floods are manifested across cities and townships. Kerala also saw three devastating floods in the past four years that together killed at least 600 people and wiped-out entire habitations.

“I don’t think it’s only climate crisis behind deadly floods in Assam and Meghalaya. Urbanisation, infrastructure and increase in population and migration of people from neighbouring areas have to be considered,” explained DS Pai, director of Institute of Climate Change Studies and former climate scientist at IMD Pune.

“Development along rivers needs to be monitored. Flooding is an inherent problem in Assam. Orographic rainfall is common in that region. It’s time to adapt to these extremes. The same applies to Kerala. The intensity of extreme localised rainfall is increasing.”

According to Anjal Prakash, research director of Bharti Institute of Public Policy at the Indian School of Business, Hyderabad, Bangladesh was always vulnerable and affected by cyclones, but now the upper northwest region of that country and the neighbouring northeast India witness deadly floods.

“This creates immense stress for people because we are seeing men migrating in large numbers and the drudgery of women have increased in the region manifold. These concerns have been covered by IPCC also,” Prakash said during a webinar on ‘Economic impacts of changing monsoon patterns in India.’

“There is disastrous impact on agriculture in this region. I have been saying that we need a separate ministry for climate change. It is being dealt with in a very fragmented manner now.”